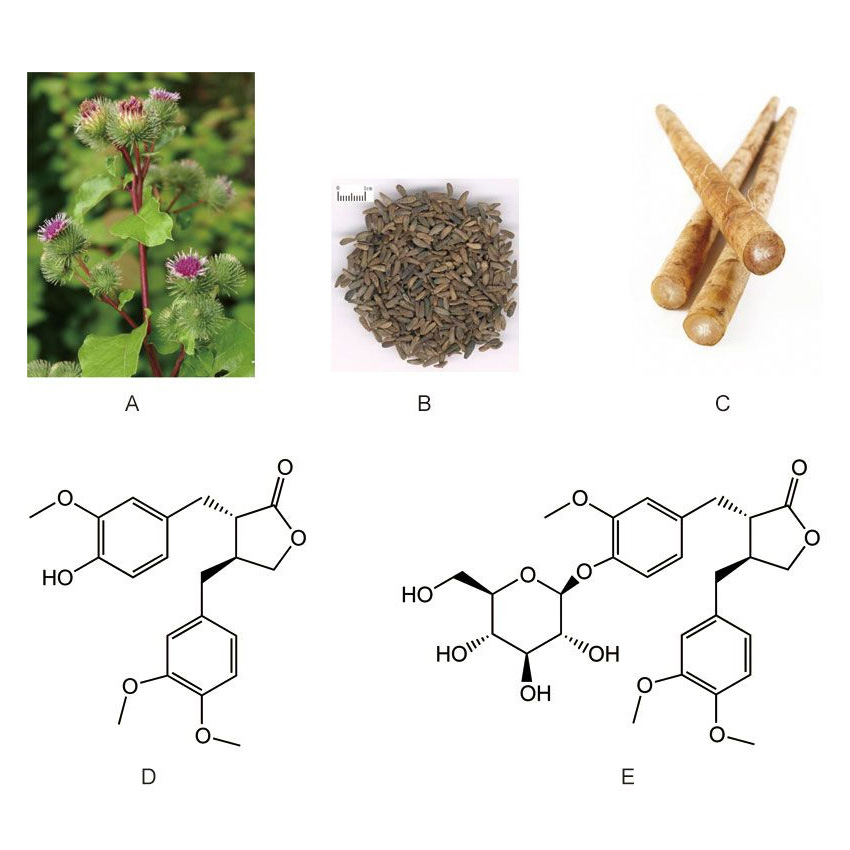 Arctiin is the major active lignin in fruits of the burdock plant A. lappa. It demonstrates potent antiviral activity against influenza A virus and anti-inflammatory effects by decreasing the production of nitric oxide and pro-inflammatory cytokines.

Arctigenin (AR) and its glycoside, arctiin, are two major active ingredients of Arctium lappa L (A lappa), a popular medicinal herb and health supplement frequently used in Asia. In the past several decades, bioactive components from A lappa have attracted the attention of researchers due to their promising therapeutic effects. In the current article, we aimed to provide an overview of the pharmacology of AR and arctiin, focusing on their anti-inflammatory effects, pharmacokinetics properties and clinical efficacies. Compared to acrtiin, AR was reported as the most potent bioactive component of A lappa in the majority of studies. AR exhibits potent anti-inflammatory activities by inhibiting inducible nitric oxide synthase (iNOS) via modulation of several cytokines. Due to its potent anti-inflammatory effects, AR may serve as a potential therapeutic compound against both acute inflammation and various chronic diseases. However, pharmacokinetic studies demonstrated the extensive glucuronidation and hydrolysis of AR in liver, intestine and plasma, which might hinder its in vivo and clinical efficacy after oral administration. Based on the reviewed pharmacological and pharmacokinetic characteristics of AR, further pharmacokinetic and pharmacodynamic studies of AR via alternative administration routes are suggested to promote its ability to serve as a therapeutic agent as well as an ideal bioactive marker for A lappa.