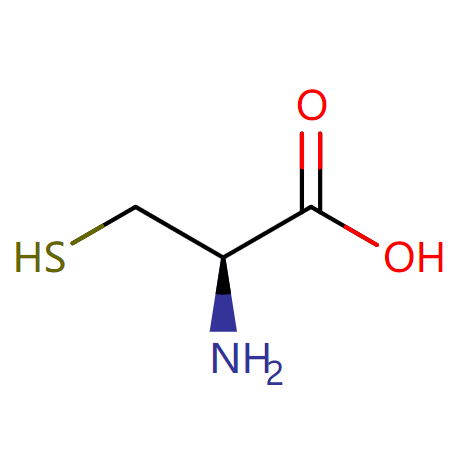 L-Cysteine is an α-amino acid with the chemical formula HO2CCH(NH2)CH2SH and is denoted by the E number E920. It is one of the building blocks of protein and is important in the production of antioxidants. L-Cysteinecan be used in a wide array of products such as baked goods, flavor additives, baby foods, and functional food supplements.

Cysteine can usually be synthesized by the human body under normal physiological conditions if a sufficient quantity of methionine is available. Cysteine is typically synthesized in the human body when there is sufficient methionine available. Cysteine exhibits antioxidant properties and participates in redox reactions. Cysteine’s antioxidant properties are typically expressed in the tripeptide glutathione, which occurs in humans as well as other organisms. Glutathione (GSH) typically requires biosynthesis from its constituent amino acids, cysteine, glycine, and glutamic acid, due to its limited systemic availability. Glutamic acid and glycine are readily available in the diets of most industrialized countries, but the availability of cysteine can be the limiting substrate. In human metabolism, cysteine is also involved in the generation of sulfide present in iron-sulfur clusters and nitrogenase by acting as a precursor. In a 1994 report released by five top cigarette companies, cysteine is one of the 599 additives to cigarettes. Its use or purpose, however, is unknown, like most cigarette additives. Its inclusion in cigarettes could offer two benefits: Acting as an expectorant, since smoking increases mucus production in the lungs; and increasing the beneficial antioxidant glutathione (which is diminished in smokers).