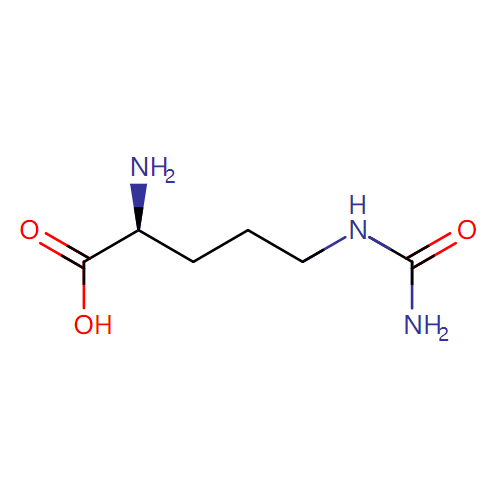 Citrulline is an amino acid. It is made from ornithine and carbamoyl phosphate in one of the central reactions in the urea cycle. It is also produced from arginine as a by-product of the reaction catalyzed by NOS family. Its name is derived from citrullus, the Latin word for watermelon, from which it was first isolated.

A non-essential amino acid and a precursor of arginine. Citrulline supplements have been claimed to promote energy levels, stimulate the immune system and help detoxify ammonia (a cell toxin). L-citrulline is made from L-ornithine and carbamoyl phosphate in one of the central reactions in the urea cycle. It is also produced from L-arginine as a by-product of the reaction catalyzed by the enzyme NO synthase. L-citrulline, while being an amino acid, is not involved in protein synthesis and is not one of the amino acids coded for by DNA. Although citrulline cannot be incorporated in proteins during protein synthesis, several proteins are known to contain citrulline as an amino acid. These citrulline residues are generated by a family of enzymes called peptidylarginine deiminases (PADs), which convert the amino acid arginine into citrulline. Proteins that contain citrulline residues include myelin basic protein (MBP), fillagrin and several histone proteins.